We had a beautiful day for the open garden last week and raised £800 for charity! 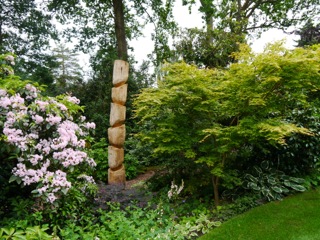 Our visitors seemed to enjoy the garden and of course the glorious weather (and fabulous home made cakes baked by my generous friends!)

Of particular interest were the Cornus kousa chinensis with its sparkling white bracts and the Kalmia latifolia iced-gem flowers. 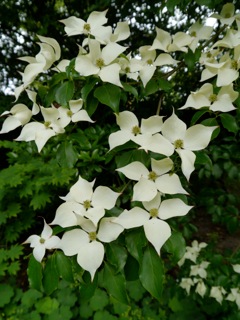 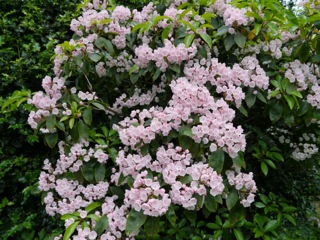 The area around the pond is late this year so many of the flowers are still to open but it still set a peaceful scene with the trickle of water from the small waterfall.  I probably have too much Alchemilla planted but it seeds itself around so generously… 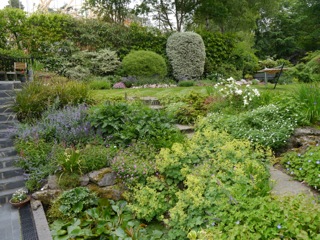 Geranium Patricia gave a splash of colour in the shade under the oaks with the bright white edge of Hosta Patriot. 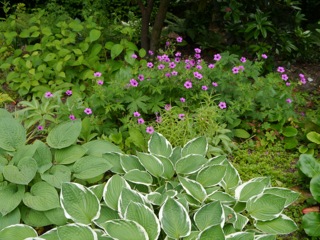 Plant of the year last year at Chelsea was Anemone White Swan – pictured below in semi-shade beside a new Forest Pansy and some pretty violas. 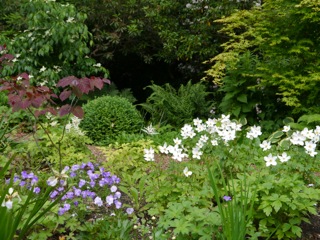 Much of the cottage border was still in bud but the Diascias, Viola Martin and Salvia Caradonna were lovely.  The white daisies are just a bedding pot of Marguerites from Longacres but they will flower all summer. 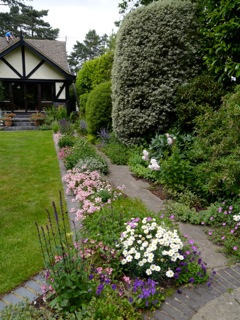 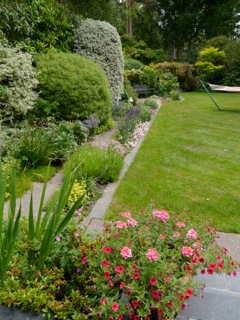 Cottage border from the other end!

The veg garden was much admired – broad beans, lettuce and beetroot etc in abundance and tomatoes, chillies and lemon grass in the greenhouse. 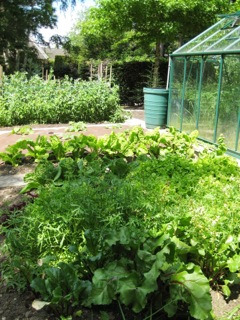 We had fabulous help from friends and neighbours and the dog! 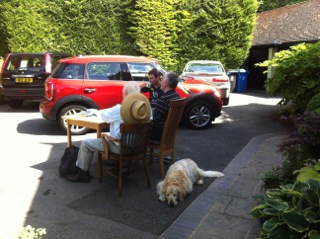 Three men and a dog

…and the cakes…did I mention the cakes? 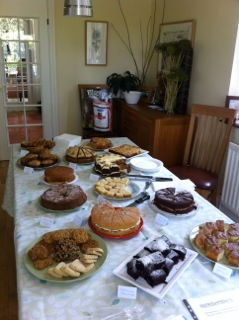 Posted in Uncategorised | Comments Off
May
13 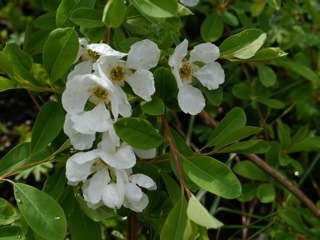 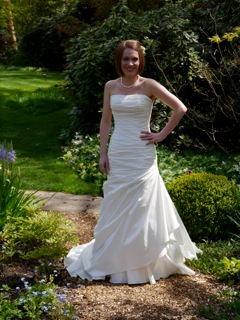 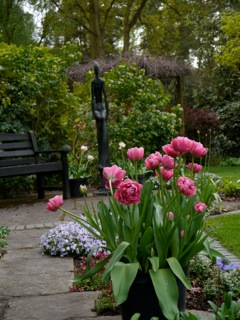 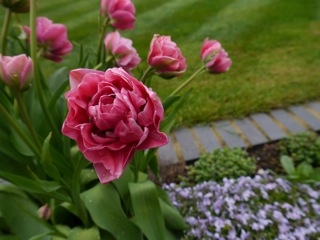 When I heard Kate and Tom were to be married in May 2013 I planted 10 pots of 12 late double tulips in October and kept them tucked away under the hedge to keep them cool and sheltered. 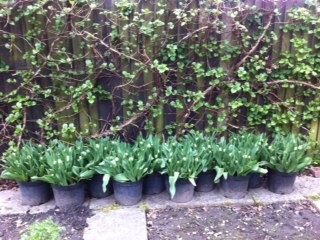 Pots in the shade

Two weeks ago, I brought them out into the sunshine and worried that the mini heatwave would spoil them – but they were perfect – except they weren’t what I ordered!!!  I had ordered ‘Angelique’ which is a pale pink double flower (sometimes called a Paoeny flowered tulip) and these are certainly not pale pink. 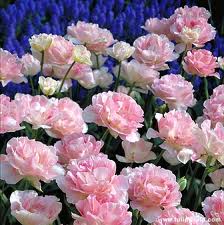 It didn’t matter but I am curious what this variety is.
The Camassias were looking lovely too and matched the bridesmaids dresses. 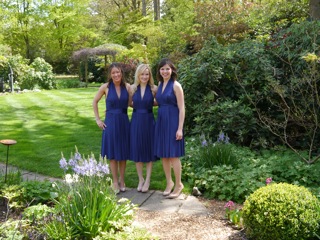 Pretty maids all in a row

Kate’s bouquet was a delightful mix of whites and blues – with sprigs of Rosemary for faithfulness. Victorian brides would plant cuttings of rosemary from their bouquets to give to their own daughters…I shall have to try to take a cutting!  White roses symbolise purity and Bluebells, everlasting love. 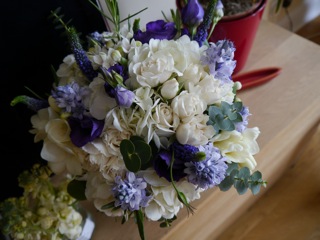 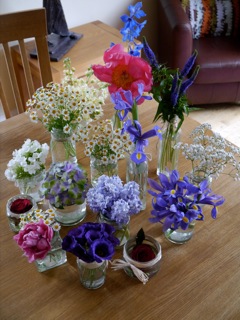 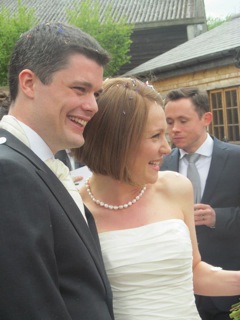 Posted in Uncategorised | Comments Off
Apr
26

So good to see Spring at last!

Planting daffs in lawn in October 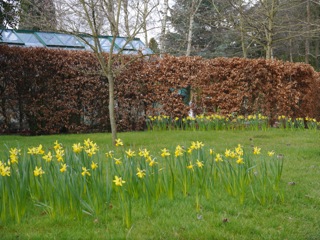 A host of golden daffodils in March and April

I had planted these February Gold daffodils in  the hope they would be open for my big birthday at the end of February – they didnt make it!

What a long cold winter we had – but cheer up, Spring is definitely here now!

Posted in General | Comments Off
Feb
11

Sunburst in the woodland

A dog walk in Windsor Great Park last weekend rewarded me with this delight – massed yellow and orange witch hazels in full flower. 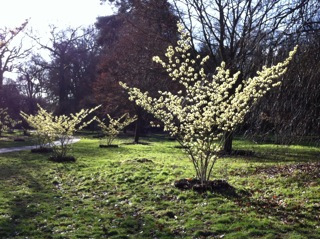 Witch hazel or Hamamelis remind the gardener that spring is on the way with their delightful habit of flowering on bare wood when nothing much else is going on in the garden.   They are great edge of woodland shrubs in this local area and some varieties have a light spicy fragrance. 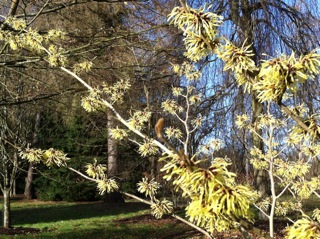 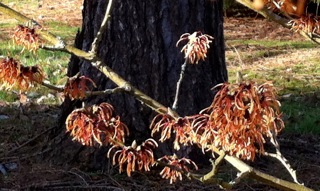 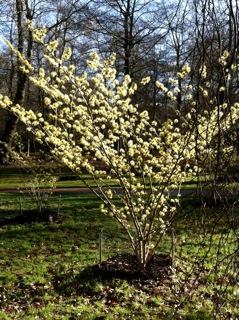 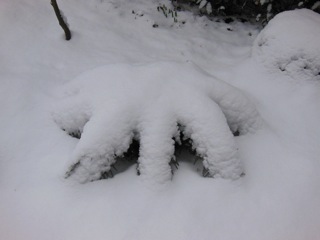 I took a break from clearing the drive from our massive snow fall and found this strange creature in the wood…my snow starfish!  Well, it amused me!

I noticed how, despite the low light and heavy snowfall, the clipped shapes really contribute to the winter garden. 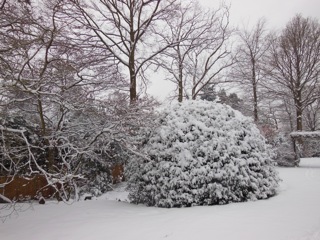 The boring laurel hedge which normally hides the bonfire pile in the corner and the simple bench provided a solid structural presence and architectural focal point. 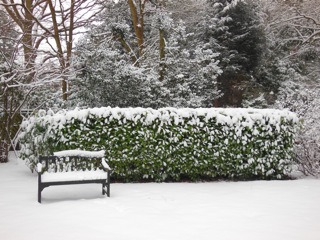 Posted in General, Uncategorised | Comments Off