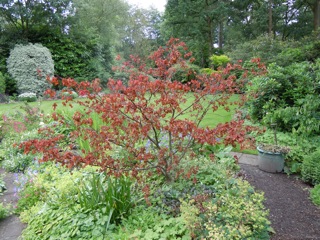 We planted this beautiful Acer Ozakazuki about 18 years ago –  before we knew much about gardening really.  We bought it at great expense from Pantiles, dug a hole in our poor sandy soil and planted it  - no compost, soil improvement, nothing!

It has delighted us each autumn with stunning scarlet foliage but sadly this summer has succumbed to honey fungus. 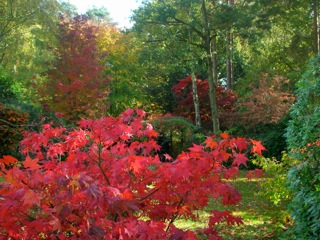 Earlier in the year the tree came into leaf but didn’t look very healthy – we gave it love and attention, water and compost but too late – the leaves gradually shrivelled up and died.

I dug around at the base this morning and discovered the lower trunk was soft, wet and rotten.  Another common name for this fungus is Collar rot! 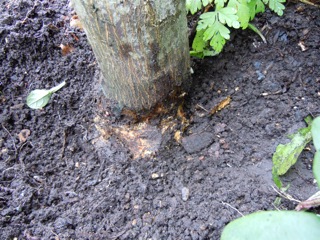 Rotten bark and trunk at the base

To be sure, I took a sample of branch, trunk, roots and surrounding soil to the Advice Centre at RHS, Wisley where they confirmed the dreaded Honey Fungus had killed our beautiful tree.

Honey Fungus ( Armillaria) is a fungus present in most woodland areas which lives on dead tree stumps and other debris.  It spreads through the soil using ‘bootlace’ strings which can grow 1m per year and can become up to 30m long providing the strings still have a food source.  When the growing tips come across susceptible living plants they are able to penetrate the tissues and grow though to the inner layers of bark and weaken and eventually kill the plant.  The fungus then has a new food source which acts as a focus of infection with the ‘bootlaces’ spreading out from there.  In some seasons toadstools may appear but are very variable in size and colour – the cap though is usually honey coloured, hence the name.

The fungus can infect perfectly healthy plants growing in good conditions but poor conditions – drought, waterlogging or malnutrition will make a plant more susceptible.   The RHS leaflet publish a list of the most susceptible species :-

There are no chemicals to control Honey Fungus but it can be controlled to minimise further deaths.

2   Dig up and destroy dead and nearly dead plants together with the roots.  In a hedgerow, dig up plants 1m either side of the dead ones.

3   Where practical remove tree stumps or have them chipped out by a stump grinder.

4   A physical barrier can be installed if the source can be established eg a 30cm vertical sheet of polythene, pond liner or PVC.

I am going to dig out and destroy the plant and roots this weekend and dig over the soil to find the ‘bootlaces’ (which I have seen in the past and assumed they were old rhododendron roots!) 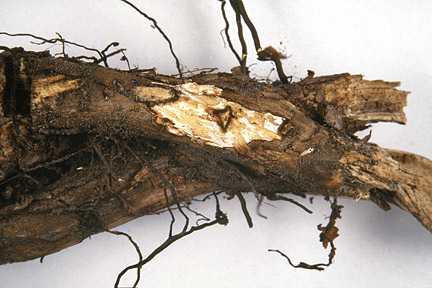 As Acers are a particularly susceptible species I think I will try a Cercis ‘Forest Pansy’ in its place – it’s a small trees with heart-shaped leaves and clusters of bright pink pea-flowers opening before the leaves.  It’s grown mainly for its purple foliage and has an award of garden merit from the RHS. 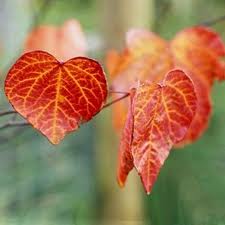 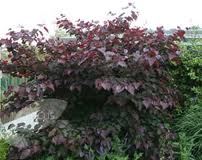 I can’t finish without a comment on the weather – there is a rare and strange thing in the sky this morning – do you remember when it used to shine and we wanted to use hosepipes to water our gardens?

This entry was posted in Ascot Matters, General. Bookmark the permalink.